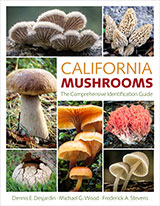 Fungal Frissons
(and how to prepare [for] them)

They course through my surprised synapses with the paralyzing speed of frogs' tongues zapping particularly juicy bugs--zott! Jolting my extremities with the same gushing force of, say, Hoover dam's water releases (like they show you in stupid old movies to metaphorically describe a sexual event) are these fortunately familiar sensations that the French call frissons and I call upon to happen as often as possible.

Of course I'm talking about the at once hot and cold pleasurable skin flushing flashes that can accompany the discovery of really good looking and tasty mushrooms. This fiery feeling can happen during any outing but it can be especially satisfying when it comes from plucking shrooms right in front of someone else's nose. . . .

I don't mean to sound too insensitive but this has been most gratifying and has caused exceedingly enjoyable times for this hunter when I am with braggart type pickers. Any of a number of my collecting cronies qualify every once in a while in this category. It's as if I have something to do with this behavior. It just seems that a weirdness overcomes them and they want to show me up (like I have an ego associated with mushroom stuff, whatever).

Or maybe it is because of that time when on a cold December's eve I served soothing hot and sour soup and told them later that those rather odd appearing fungi so stewed were stinkhorns. . . . You never know, really, what goes on in the minds of mushroom people.

I wonder if they experience some kinds of frissons on their own when recollecting the texture and taste of those cooked cockamamie canine, uh, things. I dunno.

I do know of a pre-season type of frisson the occurs during the dreary late winter days when remembering just how many morels will be hiding amongst the logging road cuts and fir cones in the Sierra. Like in Arora's little book--you know that picture with the caption which asks you to guess the total of esculents lurking in the photo?

Just above the photo is a great brief essay by Andy Weil addressing in part how the brain tends to screen out things that it does not consider significant--in this case morels hiding amongst leaf litter. Well, the brain can not screen out the shuddering subjects of this piece because they are involuntary sensations manufactured deep within our own DNA mushroom make-up. And that's no lie, at least not one of significance, if your brain can tell the difference.

The other day I got a goose bumping as I drove down busy highway 101 in Marin and remembered the burn up in Lake county. That specific shiver was not enough to endanger other vehicles driving close but it did make a few of those folks who could see me wonder what I was doing. You know that after drinking bunches of beer you have to wait in line to relieve yourself? Well, that feeling experienced when finally bellying up to the porcelain and letting go is another form of frisson that maybe I appeared to be spellbound under by the looks on the faces in the other cars. . . . .

A frisson flowed mightily also when I recalled the fire in the bull pines above those famous vineyards nearby the town of Sonoma and then I thought of the conflagration outside Yosemite this past summer.

Kathy and I were flying into California from "Wild Mushrooms Telluride" when that one was still presenting plumes. I looked down at those swirls of lightning caused smoke as if they were signals being sent up to just ole me--God's own indicators of just where morels would be fruiting amongst the charred remains. "Patrick, this is the FunGod himself-- look here and you will be rewarded. And you can write about it, thereby rewarding your loyal readers." Hard to believe, isn't it?

Another thing that can make it difficult to keep faith in the Natural Order of the Way Stuff Should Work (is that like one of those scientific maxims [isn't that a restaurant where morilles were cooked really good in Paris?]?) {and isn't this going a bit too far?} is traveling to a choice burned area only to find that so-called "perfect" conditions are not that. Somebody forgot to tell the morels that they should grow there. A negative frisson can be experienced and it is not too good.

But as you all know nothing negative should be used as a segue into this issue's recipe of wonderfulness. So let's tell a quick joke.

Irishman walks into a pub, orders three pints of Guiness, takes them to a rear table and drinks them a sip out of each at a time until they are all drained. Does this regularly for a few months and gets to know the bar man and the other imbibers well enough for them to notice his peculiar habit. Bar man relates that if he drew but one at a time the stout would be a wee bit fresher and he wouldn't have to wait so long for his first sip. The man responded that he has two brothers in separate parts of the world and in honor of each other they all drink this way. One day he come in and orders but two pints, takes them to the table in back and drains them in his usual way. Next time he comes in and orders just two again the bar man asks quietly if something tragic has happened to one of his brothers. "Not so," the man offers cheerily, "I've quit drinkin'!"

Hah, hah, hah, and hmm, is there a pint hiding in my frig? No but there are an assortment of microbrews that have at other times found their ways into a variety of my recipes. Cooking with beers (lagers, ales, stouts, porters, etc.) can be fun--as with wine (just look at Julia Childs). Drinking with them can be funner as can be your writing if done concurrently. . . .

Wrappers are very popular in the San Francisco Bay Area, as in sun-dried tomato flour tortillas, souflakis, Ethiopian flat breads, plain old tortillas maize, et al, and won ton surrounded goodies. So I was thinking that with the variety of Oriental style food wraps available here why not make a pile of deep fried (with an extra side of grease to dip into) wild mushroom things. Why not this?

This recipe is so easy that instead of just following my directions we shall simply look inward, into the tomes of your good fungal food past. Use leftover (l/o's) mushroom dishes for these real simple teasers and they will taste at least as good as when they were first made. Basic assumptions are inherent here--that your l/o's were tasty to begin with and that they are dishes made without pasta, bones, large chunks of unknowns. . . . If you think that maybe, just maybe yours might not be, or if you want me to do the work, a filling will follow these first paragraphs that is guaranteed to be great.

Take a tablespoon of your l/o's and plop whatever it is in the middle of any of a number of Chinese and/or Japanese pasta type small uncooked pancake looking deals. These can be square, round, rectangular or triangular and are always found in a refrigerated section of a market, usually above the produce. Fold up the won ton wrap wetting the seam with a mix of cornstarch and water to help glue it closed. Deep fry at 375 degrees til golden brown, drain and serve immediately.

If I sound especially insouciant today it is because this column's food matter is really easy for you to be creative with. Use your imagination. I have a theory that one can deep fat fry anything and someone will like it! . . . Try something on your own.

Reluctantly, but duty bound, MycoChef went into his recipe think tank (which is different than just going into the tank, I think) and created this from the abysses of his Swiss cheese like brain.

Super Simple Yummy Filling For Which You Can Wrapsodize Over

Caramelize the onion with the herbs in some of the butter. Toss in the mushrooms with more of the butter and sauté until just done. Add the beer, reduce until almost dry. Add the spinach to wilt then add the nuts, salt and pepper and set aside to cool a bit.

Heat some oil for frying. I suggest pure olive oil (a grade, not a statement that it is only olive oil). Extra Virgin might scorch (ever seen one that didn't get burned at least once?). Follow the instructions for cooking above.